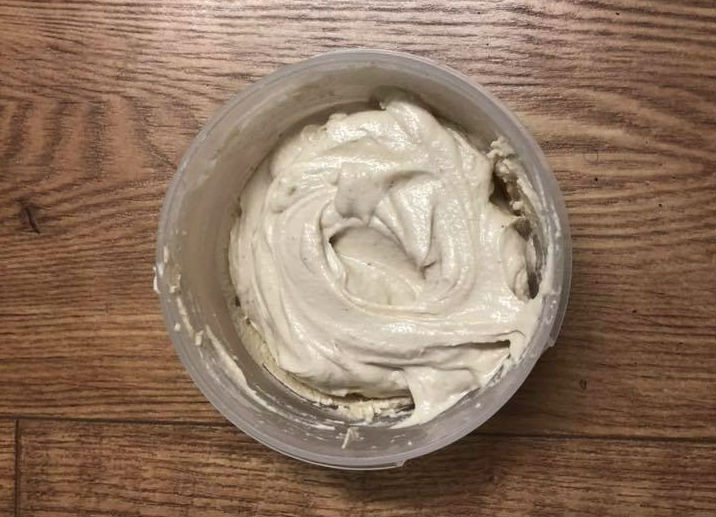 God, it feels like yesterday I became vegan. Remember when I was trying to blog it into existence in July? Haha!

I’ve been pretty good at finding alternatives to cheese and yoghurt – the only two dairy products I actually ate (the thought of eggs and milk have been making me heave for yeaarrrss). I still haven’t brought vegan cheese to the house and if I wanted some at home, I’d make it myself the way I made my own parmesan cheese.

I remember labneh was one of the first things that came to mind when giving up dairy. My whole childhood is characterised by labneh – from the way I used to love labneh mixed with olive oil in a zaatar, cucumber, tomato and olive pitta to feeling embarrassed when my mum made me labneh sandwiches at school and everyone else had standard ham and cheese that was too haram for my family’s liking. Giving it up wasn’t just giving up yoghurt, it was giving up an essential part of my childhood and my beautiful culture.

Dramatic? I’m Palestinian. We’re allowed to be dramatic after decades of exile, displacement, siege, etc. Being possessive of our food is one of the very ways we, especially in the diaspora hold onto our wonderful roots.

So, here’s the recipe – I have been experimenting a lot over the past few weeks and I finally have something I’m impressed with. The yield is what you see in the photo.

2 cups of cashews – soaked
1 lemon
3 tablespoons of water to start and add more if needed (I ended up adding around 4 tbsps)
2 teaspoons of vinegar (just make sure the vinegar isn’t dark in colour so it doesn’t stain the labneh)
Salt to taste – I added 1.5 teaspoons of pink Himalayan salt and then added a crap load more because I love it salty

Guys, it’s really that easy. There are some catches and mistakes I made so listen up:

First of all, don’t use dark coloured vinegar. Mine turned out darker than it should because I used half apple cider vinegar and half malt vinegar because I was scared of it tasting too much like apple cider. Stupid mistake. In retrospect, I should have added more lemon and less vinegar or mixed apple cider vinegar with another vinegar. Here are some vinegars you can use:

Each type has different properties so be sure to look up the type of vinegar. Next time I do it, I’m probably going to either mix apple cider with rice vinegar or just use rice vinegar.

Almonds – ahhhhh! I remember when I first tried to make vegan cream cheese I did it with almonds. Huge bloody mistake. It is doable but it definitely wasn’t for my first time. Almonds aren’t as creamy as cashews and they take longer to soften up. Then you have to peel them if you haven’t bought them pre-peeled which is such a long process that it makes you want to peel your own skin off instead. You also risk breaking a nail regardless of the tool you use. Waah! So always start with cashews.

Mix the mixture! If you’re scared don’t be afraid to take the labneh out and put it back in to make sure it’s all well incorporated. You can change the texture if you don’t like it. When I made it at first it was really thick which I loved because it reminds me of the texture of when you spread labneh balls. Then I wanted to make it look like actual labneh so I put the mixture back in the blender, added a tiny bit of water and started blending again until it turned creamy af:

It really helped me to boost my confidence in the labneh because I saw how easy it was to change the texture.

Guys, keep trying. If you don’t get it right the first time, it’s okay. Analyse and learn from your mistakes and trust that you’ll make it perfectly the next time round!!

And once you learn how to make a creamy paste out of nuts, you can adapt it in different ways. Skip the vinegar and add nutritional yeast (or maybe turmeric) for a cheese spread. You can also make sweeter versions. I’m going to be experimenting with lots of different styles so if you want me to try something out, hit me up!

Good luck and love you all!! Thank you all so so so much for reading this and do repost and let me know if you made it. I absolutely love talking to you guys!